Reasons You Haven’t Manifested What You Want 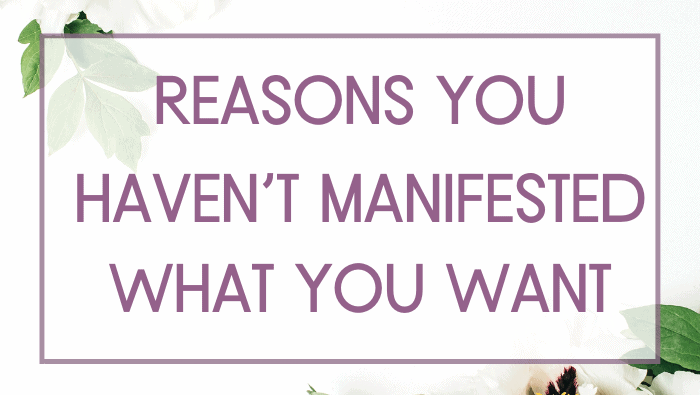 Some reasons you have NOT not manifested what you want

Law of Attraction, the Art of Manifesting, the Process of Visualizing and so forth… sound familiar? Thousands of books, articles, blogs and movies have been conceived on these very subjects. And yet, with so much hype on Law of Attraction and Manifesting you would think that everyone would have exactly what they want. There are multiple reasons you haven’t manifested what you want.

In the first place most of us know to some degree what we want, such as:

Can you resonate with any of the “desires” from the list above? Most of us can connect with one of these if not all of them. And have you taken the time to become specific on what you want? For example, “money” or the lack of it, is most common. You want more money! What will having more money do for you? Or you might really want a wonderful relationship, what will that do for you when you have it?

Do you know what you want?

Write a list and expand on it! Being crystal clear on what you want is the first step to manifesting precisely. Begin by making a list, no matter how tedious or silly it may sound. Take each want and expand on what it will do for you when you have it. Remember easy and direct statements work best. Above all your language is extremely important. To illustrate, words or phrases like when, will, can, if etc., leave what you want hanging or in limbo. The words used will determine what is manifested. Essentially, write it down as if you have it NOW!

Do you believe you can manifest it?

Belief is partly how manifestation or Law of Attraction works. Simply speaking we create or have created beliefs, and these beliefs are then stored within the Unconscious Mind. When these beliefs are preserved and securely guarded, they intensify and are anchored deeply. Not to mention, many of the beliefs we create are not for our benefit. Go back and think of simple beliefs that have been passed down. Moreover, have you accepted and adopted these beliefs as your own?

Can you imagine seeing it?

As previously stated, the Unconscious Mind is fair and literal. Running the theme of wishing for money or thinking of when the perfect person will manifest, only leaves you in the state of wanting. There is nothing more challenging to want something and not have it. For this reason, your imagination is super important!

Observe small children playing. Children play using the power of their imagination. They pretend to fly, see dragons, have a castle and so on. While playing they believe they are super-hero’s and limitless. Later on usually after the age of 7, they begin to lose sight of their imagination and accept beliefs by the world around them.

We have all used our imaginations while playing as young children. Imagining what you want, as if you have it right now is how it will manifest.

How long will it take to manifest?

Now keep mind you can have anything you want, when you have the right mindset. That does not mean it will instantaneously manifest or that it will arrive all in one shot. Here’s an example of what I am talking about. Do you remember the movie The Secret? I am sure it rings a bell, once it was filmed it became a conversation starter at every party and dinner table.

One of the key speakers in the movie “The Secret” was Tony Robbins. For instance, Tony is extremely successful and wealthy, wouldn’t you agree? If you look at his biography he did not start off this way, and it certainly was not luck. Tony created who and what he is step by step using the principals for manifesting. And yet, in the movie he gave an example of he moved into his dream home. While unpacking he uncovered a vision board from 5 years prior of a house.  Truly it was the home he had just moved into. In reality Tony did not manifest the house instantly, it manifested 5 years later.

Law of Attraction is a very fair friend, it will give you exactly what you see and believe. Belief is an integral part of how you manifest. Believe that you can have it all, stop the anxiety or fretting about how it will arrive.

Act as if it’s manifested NOW!

Often, I have heard it said to act as if you have it NOW! Easier said than done? Maybe, however, you have been given the gift of imagination. You are the movie director of your thoughts, and the author of your Conscious conversations. Acting as if you have it now, will train your Unconscious Mind that what you want is realized.

Initially this may feel uncomfortable since your current reality does not match what you want. Keep your mental conversations whole and your thoughts pristine. The Universe works hand in hand with Law of Attraction and the vibration you put out. Change happens one step at a time, be sure to keep up the momentum daily. Getting tired of the manifestation process, giving in to limiting beliefs or doubt leaves what you want hanging.

Daily gratitude to lift your vibration

Gratitude leaves a feeling of peace and happiness within. Take a moment each day to tally up what’s great in your life, even if it’s small like a grain of rice. Feeling gratitude enhances deep joy. Always check in and do an internal sweep of how you are feeling. Feeling positive results in alignment and in the vibration of manifesting.

This website uses cookies to improve your experience while you navigate through the website. Out of these cookies, the cookies that are categorized as necessary are stored on your browser as they are essential for the working of basic functionalities of the website. We also use third-party cookies that help us analyze and understand how you use this website. These cookies will be stored in your browser only with your consent. You also have the option to opt-out of these cookies. But opting out of some of these cookies may have an effect on your browsing experience.
Necessary Always Enabled
Necessary cookies are absolutely essential for the website to function properly. This category only includes cookies that ensures basic functionalities and security features of the website. These cookies do not store any personal information.
Non-necessary
Any cookies that may not be particularly necessary for the website to function and is used specifically to collect user personal data via analytics, ads, other embedded contents are termed as non-necessary cookies. It is mandatory to procure user consent prior to running these cookies on your website.
SAVE & ACCEPT